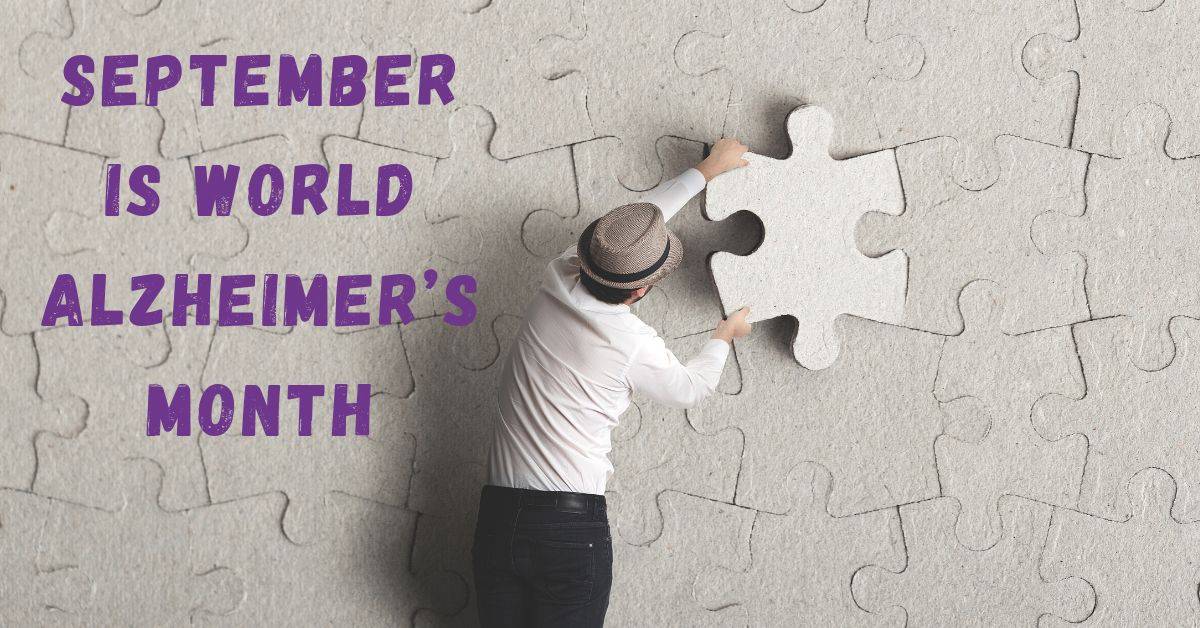 September is designated as World Alzheimer’s Month, to raise awareness on this common and devastating condition. The effects of Alzheimer’s disease are now slated to factor into the lives of tens of millions of people and is growing. Alzheimer’s disease is a specific type of dementia and generally affects people over the age of 65. Currently, over 50 million people worldwide suffer from dementia and each year there are 10 million new cases. The impact is detrimental not only to their caregivers but to their family and society as a whole. The condition is chronic and progressive in nature.

The following are some of the common symptoms as cited by the Center for Disease Control and Prevention. In the early stages of the disease, these can include:

Current efforts to learn more about Alzheimer’s disease will depend, in large part, on volunteers who participate in studies.

Our cognitive abilities are negatively impacted by age, medication, lifestyle choices and genetics amongst other factors. It has recently been confirmed by medical research and studies that hearing loss plays a big part in our cognitive health and is definitively connected to its capability to function at an optimum level. At an early age, sounds we perceive are turned into neural networks so the brain can effectively receive and translate audio information. These pathways are what we rely upon and recognize as sound. If anything is lacking in our hearing process the pathways are disrupted and degenerate with lack of use, distortion and time.

Because Alzheimer’s negatively impacts our cognition, hearing loss becomes a factor in the upkeep of our cognitive abilities. Our communication is affected by our hearing ability and it is in decline our need to interact with others is damaged on every level.

Frank Lin, M.D., Ph.D., of Johns Hopkins University School of Medicine conducted a study to investigate the link between dementia and hearing loss. The study involved over 600 participants that were tested for their cognitive abilities every two for over a decade. The data acquired and analyzed from the Baltimore Longitudinal Study on Aging (BLSA) showed that the “study participants with hearing loss at the beginning of the study were significantly more likely to develop dementia by the end. Compared with volunteers with normal hearing, those with mild, moderate, and severe hearing loss had twofold, threefold, and fivefold, respectively, the risk of developing dementia over time. The more hearing loss they had, the higher their likelihood of developing the memory-robbing disease.”

The good news is that not everyone that ages suffer from dementia or that dementia translates directly to Alzheimer’s. Staying vigilant with diet, nutrition, exercise, social and physical activity is a comprehensive approach to stave off risks to dementia and cognitive decline.

As we age our social circles become increasingly important as do our family ties. It is a necessary part of a wholesome existence. It is also fundamentally important for our cognitive health. Hearing loss is an obstacle that can be overcome or navigable if we are willing to incorporate it as part of our overall health regimen.

When hearing loss is left unaddressed one of its debilitating symptoms is social withdrawal. Those who suffer from hearing loss naturally try to compensate by asking to increase volume in private or intimate settings such as the home, asking people to repeat themselves at an increasing rate and tending to shy away from places with noisy backgrounds. Their continual exertion to compensate for their hearing decline leads not only exhaustion but to isolation, as they feel more vulnerable, lack confidence and are unable to keep with once familiar interactions amongst friends and family.  This sets the foundation for further cognitive decline and exposure to depression.

One of the most important things to attend to as part of your overall health is to get an assessment of your hearing. Early detection is the key to prevention as any hearing health professional would suggest.

Advanced Hearing Solutions is here for any of your hearing needs. We are aware and equipped for any questions you or your loved ones may have. We understand that your hearing health is important to sustain and strengthen your relationships and maintain your wellness. The first appointment with us is will get you started on the path to a happier and richer life of hearing for you now.