The world of hearing aids is about to get a lot more interesting.

In Douglas Adams’ famous 1978 novel, the Hitchhiker’s Guide To The Galaxy, he wrote about a fictitious creature called the Babel Fish. In the midst of long descriptive passages about this strange life form, Douglas writes “If you stick a Babel fish in your ear you can instantly understand anything in any form of language.”

In 1978, when The Hitchhiker’s Guide To The Galaxy was published, the Babel Fish was pure science fiction, but it sparked the imagination of millions. A prominent translation service was even named after it—as you can probably guess, it’s called Babel Fish. Services such as these help people from all over the world communicate with each other every day, but they might soon be a thing of the past.

The researchers at Waverly Labs have recently announced a prototype for an earpiece that would turn what the Babel Fish does from science fiction into reality. It’s called Pilot. 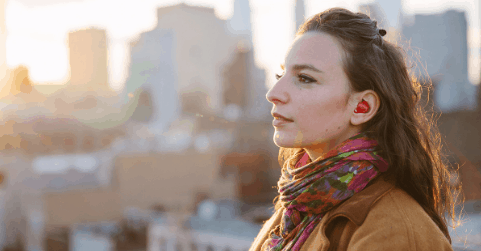 Pilot uses a “smart earpiece” loaded with an app they have developed to harness the latest speech recognition technology and translate the wearer’s conversation in real time. So far, they have developed programs for English, French, Spanish, German, and Italian. However, other language groups are expected to be rolled out soon, spanning from Slavic regions, Semitic regions, across the Indian Subcontinent, to East Asia.

Andrew Ochoa, the founder of this groundbreaking project, says that he drew his inspiration not any sci-fi novel, but his personal life. The idea came to him as he struggled to communicate with his French girlfriend.

Fast-forward to the present, and pre-orders for this amazing device are already being accepted via IndieGoGo for the spring of 2017. This incredible piece of technology is expected to be sold for $299.00, including with it a select group of languages, but additional languages will be available to download through the app.

The exact logistics of how this product will be officially launched are yet to be announced, but one thing is certain: this could be a game changer.

If you or a loved one is experiencing hearing loss, there is help. Here in the Mt. Juliet area of the greater Nashville area, Advanced Hearing Solutions provides those in our area with the best hearing aids and solutions to their hearing problems.