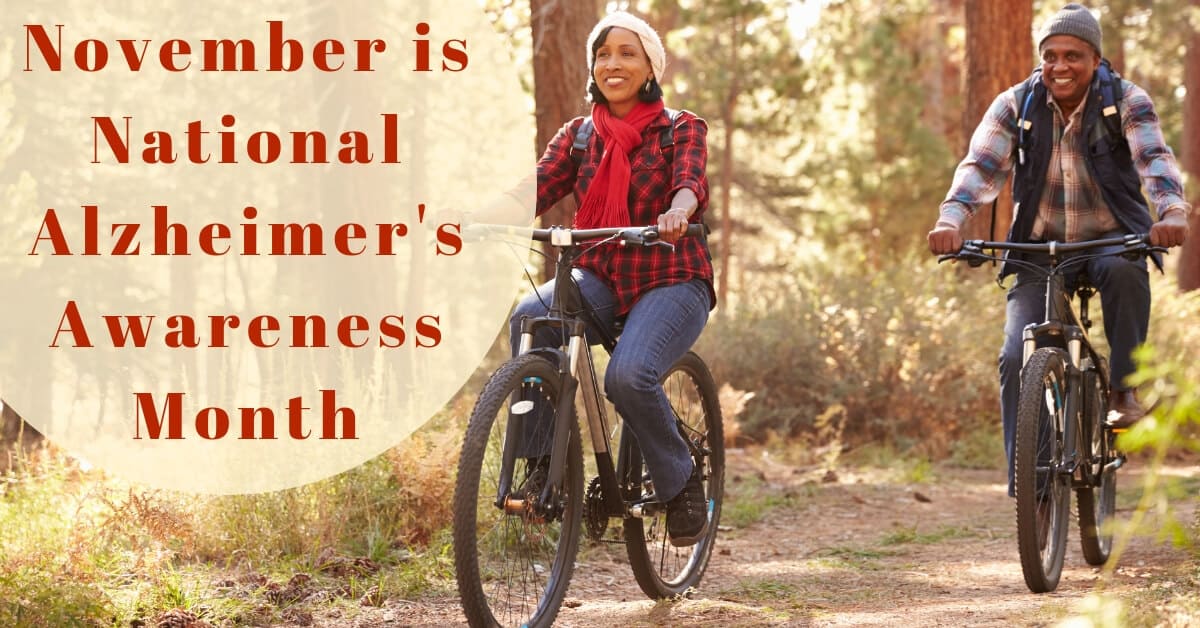 The holidays are approaching fast, and you may be relishing the idea of spending some quality time with your immediate and extended family…or you may be dreading it. If you are living with untreated hearing loss, the idea of keeping up with dinner conversation over the swell of Christmas music might fill you with anxiety.

Not being able to hear well enough to communicate can certainly put a strain on relationships, and get in the way of what should be enjoyable moments with our friends and family. Recent studies suggest that untreated hearing loss can also increase our risk for cognitive decline, Alzheimer’s disease and other forms of dementia.

November is a festive month, as we celebrate Thanksgiving, get ready for the first snow and prepare to ring in the holiday season. It is also National Alzheimer’s Awareness Month, a time to learn and raise awareness about this disease which has personally affected 1 in 2 American families.

When it comes to Alzheimer’s disease, there are still many unknowns, but scientists are uncovering more every day. We now know that there are some important things we can do to keep our brains healthy, such as staying socially and physically active, refraining from smoking, and treating hearing loss with hearing aids.

Although it is true that untreated hearing loss increases our risk of dementia, the reverse is also true. Wearing hearing aids can effectively mitigate this risk and give our cognitive health a boost. One of the most important ways they do this is by helping us to stay connected with the people in our lives. Read on to find out more.

Age-related hearing loss is one of the most common conditions affecting older Americans, with 25 percent of those aged 65 to 74, and 50 percent of those who are 75 and older having difficulty hearing. Although hearing aids help significantly, fewer than 1 in 3 older Americans who could benefit from these devices actually wear them.

Hearing and communication play an important role in the health of the brain, and scientists are just beginning to unravel the intricate ways in which these things are connected. One thing they do know for certain is that when serious hearing loss goes untreated, the result is often social withdrawal and isolation, which leads to an increased risk of cognitive decline and dementia.

Frank Lin, an otologist and epidemiologist at Johns Hopkins University in Baltimore, has been researching the link between hearing loss and dementia since for many years. He and his team set out to establish whether or not untreated hearing loss leads to diminished cognitive function. In 2011, he and his team tracked the cognitive health of 639 participants who were mentally sharp at the outset. The researchers tested the participants mental abilities regularly, most for about 12 years and some for 18 years. A strong correlation was found between the severity of each person’s initial hearing loss and their risk of diminished cognitive function. Even those with only moderate hearing loss had a three-times greater chance of developing dementia.

The benefits of treating hearing loss

Wearing hearing aids can have a number of positive effects. Treating hearing loss has been shown to improve mental and physical health, strengthen relationships, increase confidence in social interactions and improve personal safety, to name just a few of the benefits.

But were you aware that hearing aids have also been proven to help stave off cognitive decline? Although researchers do not know exactly why hearing loss increases the risk of Alzheimer’s disease, it has been well-established that treating hearing loss aggressively can help to keep the brain healthy. In a comprehensive French study, researchers found that those with hearing loss who wore hearing aids had about the same chance of developing dementia as those with normal hearing.

The study, led by Isabelle Mosnier of Assistance Publique-Hopitaux in Paris, examined 94 people between the ages of 65 and 85 with profound deafness in at least one ear. Each participant with hearing loss was given a cochlear implant and also received twice-weekly auditory therapy. The results speak for themselves: more than 80 percent of those who had the lowest cognitive scores showed significant improvement one year after receiving the implant. A socially active brain is a happy brain, and it is thought that by preventing the social withdrawal and isolation that often accompany hearing loss, hearing aids help to keep our brains healthy.

With all of the technological advances in hearing aids in recent years, finding an effective solution for your hearing loss is easier than ever. The first step is a comprehensive hearing exam with Advanced Hearing Solutions, after which a member of our expert staff will assist you in selecting the hearing aids that are the best match for your level of hearing loss, budget and lifestyle. If you have been living with untreated hearing loss, take the first step and schedule your hearing appointment today. Your relationships–and your brain–will benefit.